Here is a summary of the making pictures that were uploaded on SNS. Here is the start of the making of the Yokai Kendama Otoroshi. 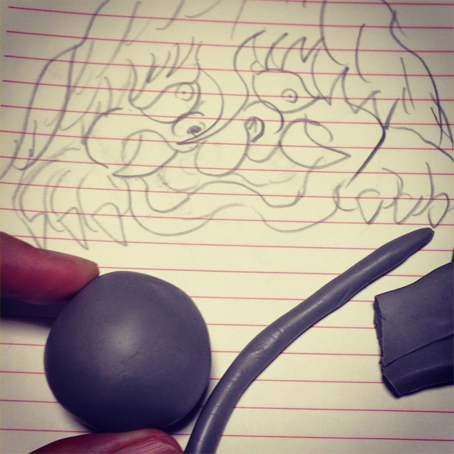 The first step is to make the prototype. Connect the clay. Sometimes I use putty, wax wax, or funds.

Basically, I don’t draw a rough sketch and just make it as I knead the clay, but this time, since the motif is a yokai called “Otoroshi,” I drew a picture of it in about five seconds after searching for it, and used it as a reference. 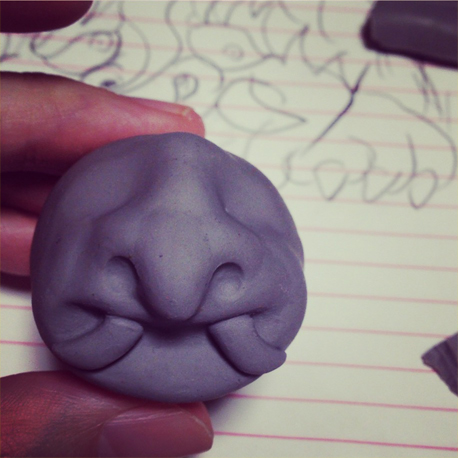 I’ve never really thought about it. (Laughs) In this case, it’s impossible to make the hair first and the nose later (because the hair is on the nose), so I think I need to make the overlapping underside first.

3.Modeling while thinking about die-cutting 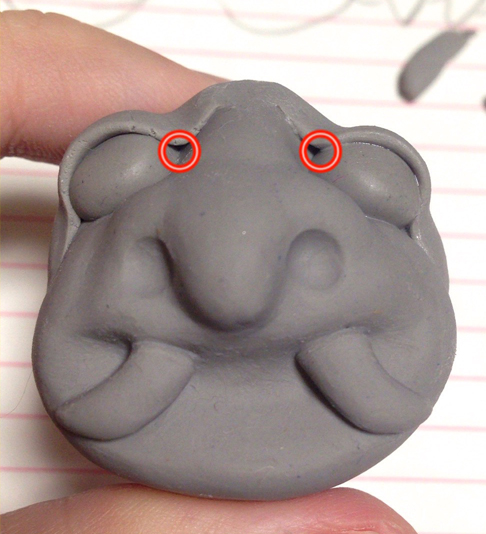 This is very important. It’s much more important than making it well! How to make the mold less fragile and how to prevent the dividing line from becoming a reverse taper makes all the difference in the cost and effort of mass production. In the case of the image, there is a small hole in the eye area, so there is a high possibility that the silicone mold will get into this area and break off. 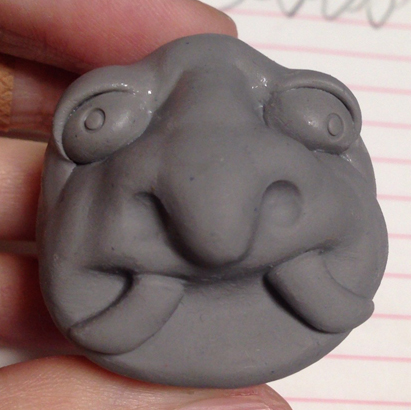 So fill the holes with small clay like this. There are many other things to do, like rounding the edges of sharp points and thickening thin points.

It is necessary to find a pattern that is easy to make many out of. If I can’t make a lot of patterns, I do a lot of simulations in my head and write them down in my notebook.

4.Make your hair based on the book. 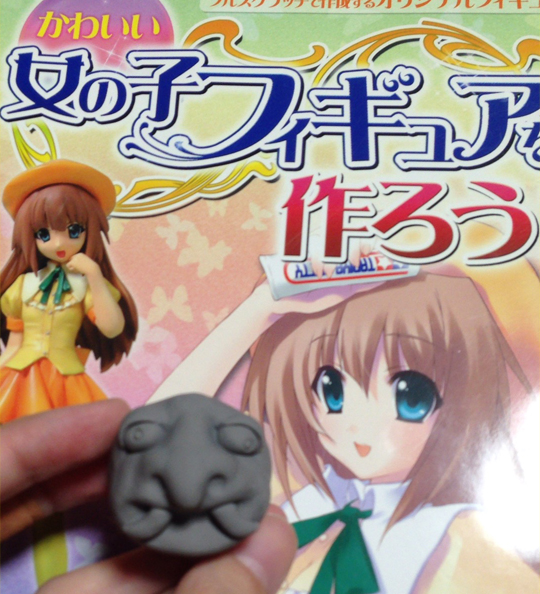 I’m troubled by the fact that there are so many “how to make beautiful girl figures” books on the market. (Sweat)

5.It’s not a beautiful girl, it’s an ugly girl. 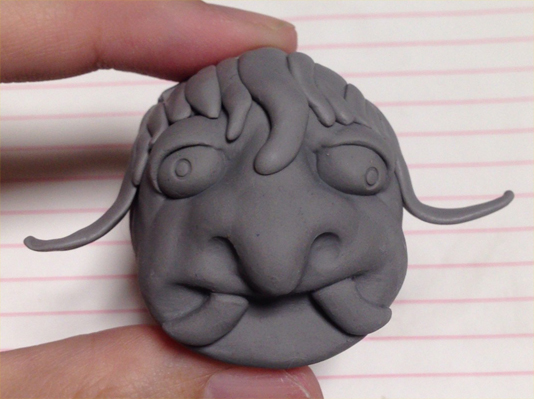 I’ve curled my hair to make it look more stylish.

There are people with this kind of face, aren’t there? 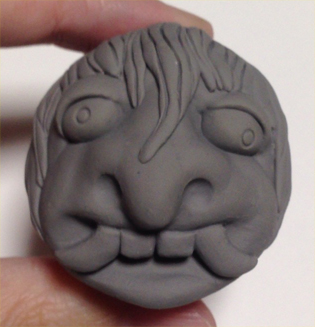 It’s no longer about how you make it, it’s about your impressions! Anyway, I felt like I was missing a tooth, so I added one. I also made the lower jaw and completed the whole process.

6.Illustrate while watching the modeling 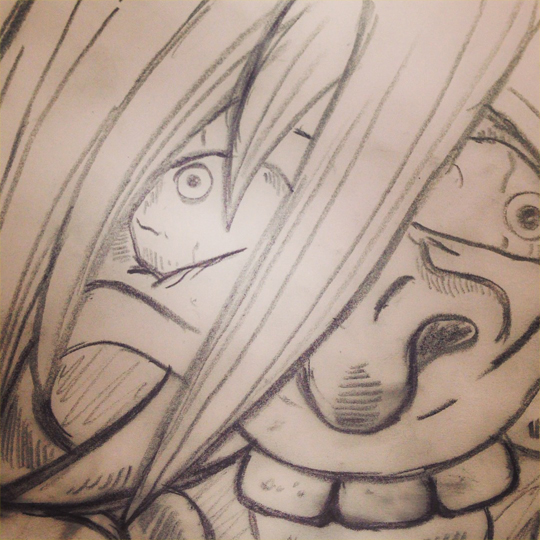 This pattern is actually quite common. It’s better to make the modeling by kneading clay with an image, and then draw the illustration after seeing it, so that the die-cutting is not overwhelmed.

If the illustration is done first, it is easy to fall into the pattern of trying to make it look cool and end up with detailed ornaments and complicated modeling, so you have to be careful. 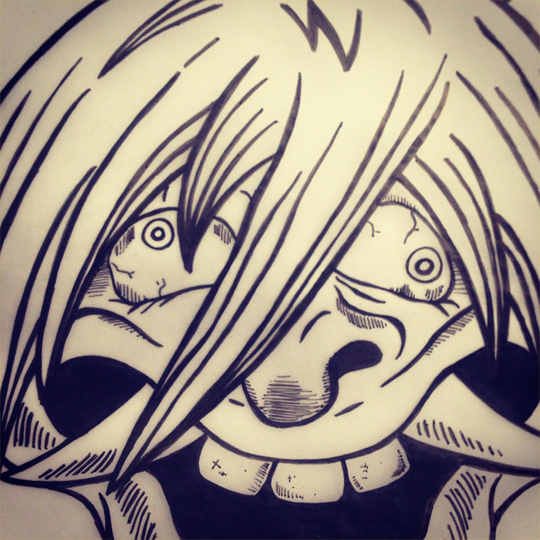 Pencils are good because they are easy to make strong and weak. Magic has a uniform line, so I make it thicker by tracing the pencil line over and over.

By the way, I have a lot of magic pencils of different thicknesses. I try to draw with different touches depending on the project. (Since I’m not an illustrator, I don’t have a fixed touch.

8.Make into cards or stickers 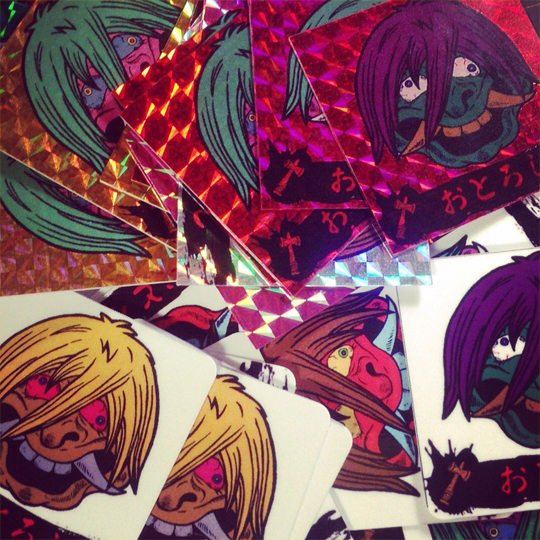 In this case, I colored it with paints, but the color was not so good when I scanned it, so I decided to redo it and color it on the computer.

I wanted to make a dark blonde version because her hair looks like a host’s, so I ended up with four different colorings. (Kira is also a basic card, but some of them are stickers.

9.The prototype will be die-cut and mass-produced to completion! 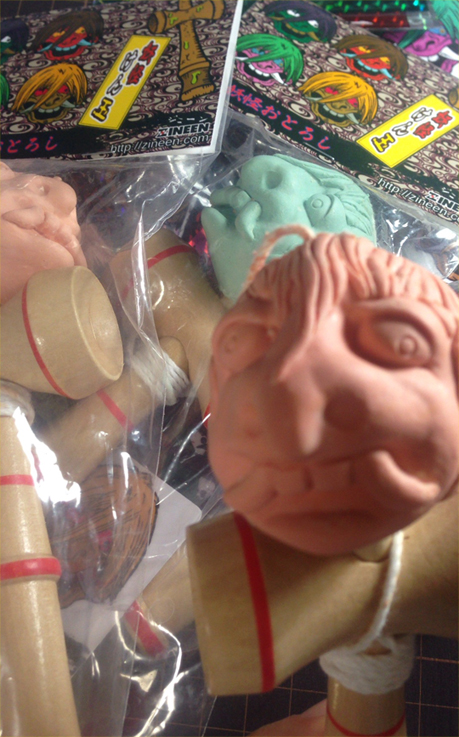 It’s just one line of text, but in reality, it’s tens of times harder than making stickers or cards. It’s a lot of work, and I hate it, but when I come up with a new technique, I want to experiment, and when it works, I get more excited and more motivated to create. (laughs).

I’m trying to solve the problem of the chemical reaction that leaves a white residue when I make a film to prevent the mold from breaking. I can’t find a solution to this problem even in the wisdom books, so I guess I’ll have to do it myself.

There are two methods of making handmade homemade holograms. Pseudo-holograms" on the left On the right is a ...
July 2, 2015: [In Memoriam] Shigeo Uchida – The Fortress of Necros – The Charm of Modeling
May 4, 2018 : From Demon Fist to Demon Sword… a project to recreate the 80’s version of the Demon Fist Warrior!
ホーム
BLOG（お知らせ）